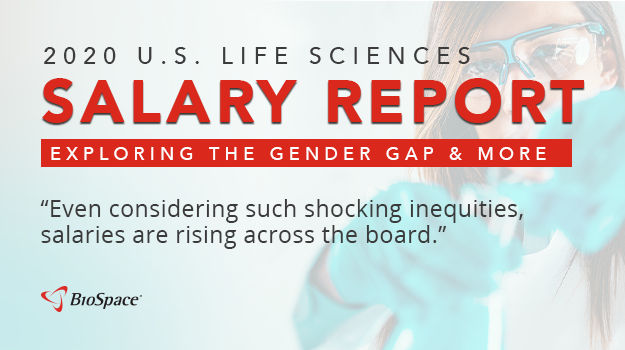 One of the most startling insights is the gender pay gap. The difference between men and women has only continued to increase throughout the life sciences industry. Notably, this survey does not simply compare “all men” to “all women” to reach that conclusion. The BioSpace study breaks down the differences between the salaries of men and women based on degree, years of experience, industry sector and region to enable a true “apples to apples” comparison.

For most categories in this study, the base salaries paid to men are significantly higher than those of their female counterparts. Their bonuses are larger, too. Men’s average base salary is nearly 20% more when compared to women’s average salaries. Overall, men’s average bonus is approximately 32% higher than women’s. For those with doctoral degrees, the pay gap is more than 28%. That’s up from a gap last year of almost 16%.

Breaking down the gender pay gap by industry sector reveals a difference of nearly 48% in healthcare, 40% in academia, 12% in biotech and 11% in pharma. In medical devices the gap was less than 7%.

These results are similar to those reported by the U.S. Census Bureau from 2018 data (the most current available). It reported that women in the professional, scientific and technical professions earned 68% as much as men in that category. In the life, physical and social sciences occupations, women earned nearly 88% as much as men. For those with graduate degrees, women’s earnings were 68% those of comparably educated men’s.

Even considering such shocking inequities, salaries are rising across the board. Most employees reported pay increases that averaged 4.6%. Nearly 60% of the raises were merit-based, while 14% were triggered by internal promotions. Another 13% increased their salaries by changing employers. That brings the overall average salary in the industry to $118,999.

On top of base salary, more than 60% of respondents also reported receiving bonuses. Industry-wide, the average annual bonus is $30,973.

For employees looking to earn top dollars, attaining a Ph.D. may not be the best plan. After 10 years in the industry, professionals with master’s degrees reported an average base salary higher than their Ph.D.-level colleagues. However, overall, professionals with advanced degrees (master’s and doctorates) can expect to earn an average of nearly $16,000 more per year than those with bachelor’s degrees. The overall earnings difference between those with master’s and those with doctoral degrees is only 2%.

Previous BioSpace research of hiring managers indicates that advanced degrees decline in importance in relation to relevant experience, strong communication skills, leadership experience and decision-making skills. Therefore, while being brilliant in the lab is important in the life sciences industry, the ability to translate research in ways that advance the business in ways business leaders can understand is also a highly sought after skill.

Biotech Bay – the San Francisco and Northern California region  – is a very close second in terms of average salary, at $136,119. Although bonuses here are less than in Genetown, the hotbed shows a slightly larger annual rate of salary increase. The other hotbeds detailed in the report are Biotech Beach, Pharm Country, BioMidwest, BioForest, Bio NC and BioCapital. Of those, BioMidwest has the lowest overall average salary, at $97,248.

This just gives a brief glimpse of the data and the breakdowns from the BioSpace 2020 U.S. Life Sciences Salary Report. The full report is comprehensive and incredibly detailed, breaking down salary by hotbed region, therapeutic area, title, discipline, years of experience, gender and more. The report even includes career insights detailing what employers feel is negotiable in a job offer.