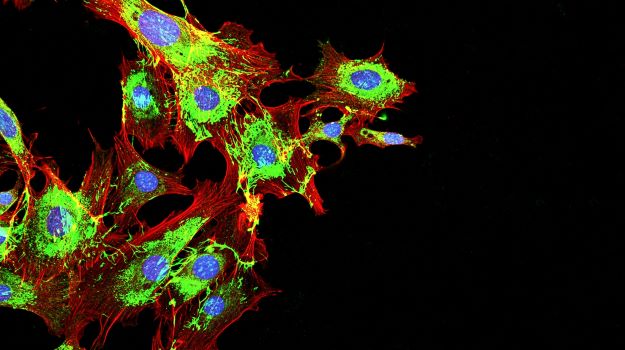 In April, nearly half the world’s population was in government-mandated lockdown to slow the spread of COVID-19. While many questioned the effectiveness of their country’s “shelter-in-place” orders, what if we could apply a similar mandate to growing breast cancer cells within the body to prevent cancer from metastasizing? Yibin Kang, a professor of molecular biology at Princeton University, and his team set out to do just that – make a world where breast cancer cannot easily spread.

The solution is found in locking down the dangerous SNAI2 protein. Initially, this protein plays an important role in embryonic development. After that, SNAI2 only turns on for narrow windows of time, such as during wound repair, to allow healthy cells to move in where needed for healing. However, in cancer patients, SNAI2 lingers. It weakens the connectors between cell surfaces. Cells lose their “stickiness,” allowing tumor cells an all-access pass to move freely around the body wreaking havoc.

Just as with any lock, there is a key. That key was discovered by Kang’s team as they successfully identified the enzymes responsible for controlling the body’s natural recycling process for SNAI2.

Here’s how the body’s internal recycling system works. Molecules called “ubiquitin” travel the body tagging proteins for destruction. These are the “good guys” of the recycling team. On the flip side, their molecular nemesis “deubiquitinases” or DUBs go around and pull off those tags. So, while the recyclers are working hard to get the body to shred damaged proteins, the dubs work equally hard to protect them.

After years of research, Kang’s team has identified the specific molecules that interact with the SNAI2 protein. Enzyme ASB13 is responsible for tagging these molecules for destruction. But dub enzyme USB20 works just as hard to pull those tags off SNAI2, allowing it to take up residence and encourage an environment ripe for cancer cell movement.

Kang and his team found that in both animal models and human breast cancer patients, tumors with a high number of ASB13 recyclers are able to flag SNAI2 for destruction in a punctual way. On the flip side, those showing more USB20 dubs were protecting the SNAI2, allowing it to flourish.

“That specificity gives us another advantage in looking for drug treatments,” Kang said. “If you target this specific enzyme, it’s unlikely to cause side effects on other proteins.”

Targeting the SNAI2 through it’s recycling enzyme is ground-breaking. SNAI2 is notoriously difficult to get rid of because it’s difficult to target with medications. It also has a few tricks up its sleeves to help cancer cells – SNAI2 makes cancer cells invisible to the immune system and resistant to chemotherapy.

Last November, the American Cancer Society awarded a lifelong ACS Research Professorship with a five-year, $400,000 commitment to invest in Kang’s research into the molecular mechanisms driving breast cancer metastasis. He already knew the key was found in the body’s natural cell recycling system. But now they’ve found the switches in the recycling system that can eliminate SNAI2, the driver of cancer’s aggressiveness, to utilize in future therapies.

It is estimated that 42,690 people will die from metastatic breast cancer this year. The 5-year survival rate for someone diagnosed with this invasive, destructive cancer is 27% for women and 22% for men. These numbers are gut-wrenching to someone sitting in front of their oncologist, hearing these words pronounced as their diagnosis. There is no cure for metastatic breast cancer. There are only treatments designed to help patients live longer and with a better quality of life.

But what if we could stop it from spreading in the first place? What if we could put breast cancer on an indefinite ‘lockdown’? Kang’s research could be the key to a viable therapy that can put a stop to the destructive spread of cancer.