Spatial transcriptomics lets researchers peek at the RNA of cells in microscope sections from tumors and the brain. How is this going to change the way we treat disease?

DNA and RNA sequencing technology has undergone a revolution in the last decade, with companies working to provide ever cheaper and faster ways to explore our genetics.

This stride forward in sequencing has, in turn, led to the development of personalized medicines to treat a range of diseases such as cancer. For example, physicians can plan the most appropriate immunotherapy for a patient based on mRNA extracted and sequenced from a tumor sample.

However, according to Richard Terry, CEO and founder of the US company ReadCoor, this mRNA sequencing approach has its limits.

“This rich complexity is impossible to get at once you start destroying that rich contextual information.”

There are already methods for visualizing mRNA sequences on tissue sections, such as RNAscope, an in situ hybridization technology developed by the US company ACD. But, the maximum number of different genes you can analyze at a time with this technique is limited.

“People like to use it and it’s very quantitative and sensitive, but you can only look at three or four genes,” explained Malte Kühnemund, Executive Vice President of the Swedish startup Cartana. “What you really need is a method that can look at 50-200 genes.”

One spatial transcriptomics method — published in Science in 2016 — involves rows of ‘spots’ on a microscope slide that are made of millions of DNA primers and unique DNA ‘barcodes’. A tissue sample is then placed on the slide and each primer sticks to a target mRNA sequence nearby in the tissue section. The captured mRNA sequences are then converted into DNA, and each sequence also has the location barcode included. The researchers can then use the barcode to map the mRNA onto the part of the tissue where it was captured. 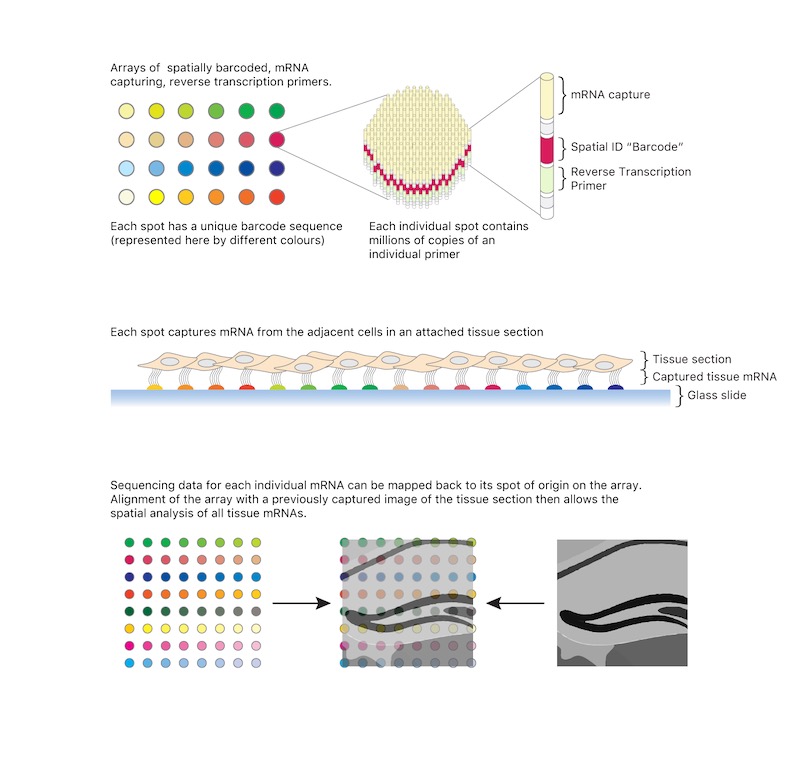 An example of a spatial transcriptomics procedure.

This technique can be used to track a lot more genes than previous spatial techniques. It has advanced the Human Cell Atlas, an international collaboration aiming to functionally map the cells of the human body.

Additionally, Swedish spinouts have also commercialized forms of the technology, including Cartana and the earlier Stockholm startup Spatial Transcriptomics, which was acquired by the US firm 10X Genomics in late 2018.

“If you analyze a sample with us, you get 100 genes,” Kühnemund told me. “It’s a lot cheaper than doing 30 different in situ hybridizations.”

Other big players around the world developing spatial transcriptomics techniques include the US companies ReadCoor and NanoString, each with different research backgrounds and technology.

Most companies in the spatial transcriptomics space market their technology for research purposes, and a number are also developing it for use in diagnostics in the future. One of the biggest applications for big players is immuno-oncology.

Currently, spatial transcriptomics companies offer immunotherapy developers the ability to peer into tumor samples in the lab and discover new drug targets or biomarkers. However, this is only the start of what the field could achieve in the next ten years in immuno-oncology.

Another intriguing application could be as a diagnostic tool in personalized medicine. This is because each tumor has a unique microenvironment that can suppress immune cells, and block the effects of particular immunotherapies such as checkpoint inhibitors. Knowing more about the microenvironment, such as the checkpoint inhibitor targets on immune cells, could let physicians choose more appropriate treatments for patients.

“Even when you look at those pathways, they are highly structured throughout the tissue,” Terry told me. “You have to look at individual cell morphology in order to even make the right diagnostic based on that test.” 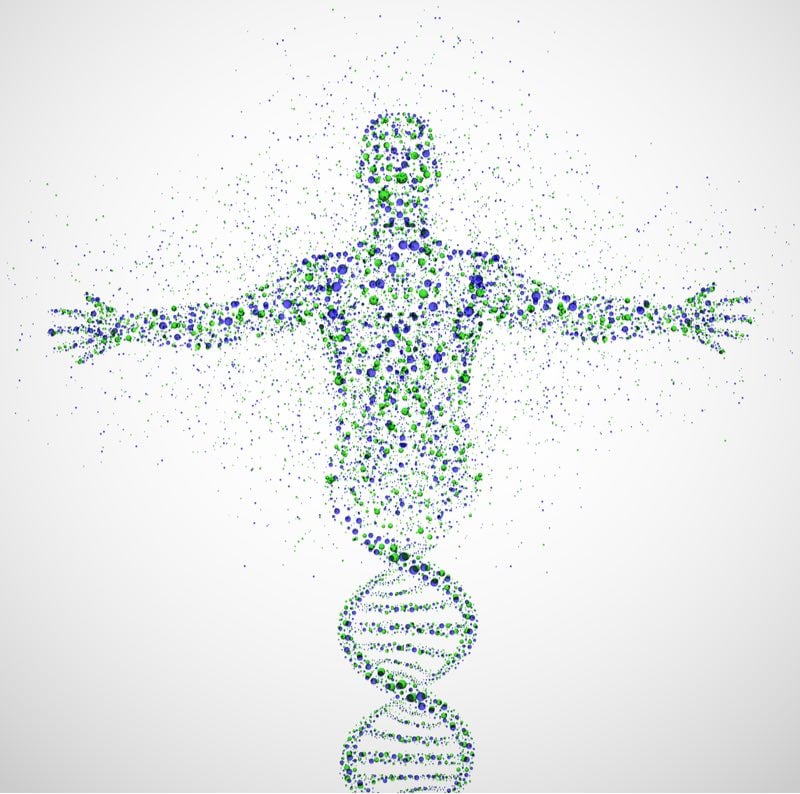 However, this personalized medicine approach is still in development, as a lot of work still needs to be done in validating the technology as a diagnostic tool.

Another hot area for spatial transcriptomics is neurology research, a historically difficult field due to the complexity of the human brain.

“If you look at a group like Roche, they’re very focused on immuno-oncology now, but their roadmap to the next few decades is to get deeply into improving brain health and brain disease through therapeutics,” noted Terry. “But to do that, you need a much deeper understanding of how the human brain works today.”

“You can actually map out where the target is in the brain, for example, and not only the approximate location inside the organ, but also in what type of cells,” Kühnemund said. “You actually now know what type of cells you are targeting. That’s completely new information for them and it might help them to understand side effects and so on.”

Another potential application of the technology, currently pursued by ReadCoor, is viral infection. For example, the technique could let clients shed light on how HIV is able to attach to immune cells and enter a latent stage.

“That’s not well understood for most viruses – what environmental factors actually trigger that or how do they come back out of that,” Terry said. 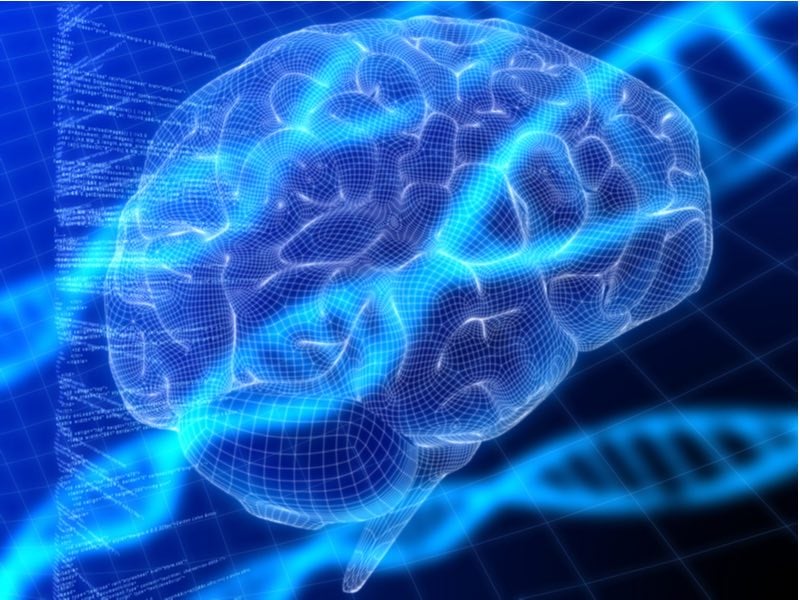 While spatial transcriptomics has a lot of promise, it is still at an early stage because of the sheer amount of scientific advances needed to develop it in the first place.

“The problem was you needed the entire field of next-generation sequencing to become mature in order to then go back and start to leverage some of those techniques and methods to deliver in-situ sequencing,” Terry said. “I think that’s what took the field so long.”

In addition, users can be easily overwhelmed by the different forms of spatial transcriptomics in development around the world, all with unique advantages in aspects such as spatial resolution, throughput, range of genes detected, and more.

“The risk could be that people just adopt the one that is most marketed and then realize, ‘Meh, that’s not really great. I can’t get the answer I need,’ and get frustrated about it and not want to invest in something else,” Kühnemund said.

However, the field is moving fast, and has the promise to be combined with other emerging technologies such as AI to improve diagnostics.

“I think it’s going to be tricky for pathologists to look at that data,” Kühnemund told me. “I think this will go hand in hand with the digital pathology revolution where computers are doing the analysis and they spit out an answer. That’s a lot more precise than what any doctor could possibly do.”

As another example of the field’s potential, ReadCoor plans to improve the resolution of the technique so that it can image deep within cells, mapping tiny structures such as neural synapses.

“We believe there will be incredible technological leaps in the next ten years that will enable new biological understanding that’s completely impossible today,” Schnall-Levin said.

As spatial transcriptomics branches out into more fields of medicine, it’s likely that the market will also expand fast. This could, in turn, make the technique more mainstream and better integrated into future healthcare.

The post Spatial Transcriptomics: A Window Into Disease appeared first on Labiotech.eu.