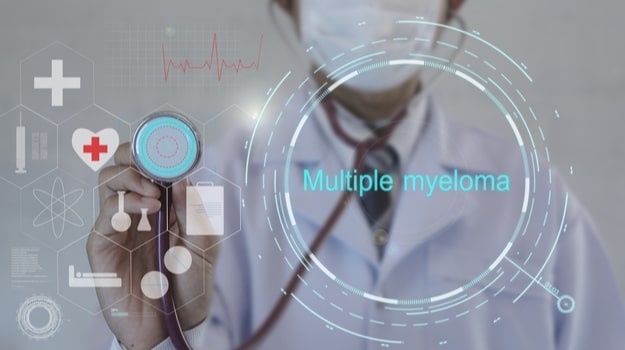 Takeda Pharmaceutical released data from the Phase III TOURMALINE-MM2 clinical trial of adding Ninlaro (ixazomib) to lenalidomide and dexamethasone compared to lenalidomide and dexamethasone plus placebo in treating newly diagnosed multiple myeloma (MM) patients who were not eligible for autologous stem cell transplant. The trial did not meet statistical significance for the primary endpoint of progression-free survival (PFS).

The addition of Ninlaro resulted in a 13.5 month increase in median PFS, 35.3 months in the Ninlaro arm compared to 21.8 months in the placebo arm, but although there was a numerical improvement, it did not hit the threshold for statistical significance.

Facon added, “Findings from the TOURMALINE-MM2 trial are important overall for this patient population as well as across multiple subgroups including patients with high-risk cytogenetics. We hope these data will help inform future research and further progress for the multiple myeloma community.”

Shaji Kumar, a TOURMALINE-MM2 trial investigator, with Mayo Clinic, presented the data at the virtual scientific meeting of the Society of Hematologic Oncology (SOHO) on September 9. The data included that in the prespecified expanded high-risk cytogenetics subgroup, median PFS was 23.8 months in the Ninlaro arm compared to 18.0 months in the placebo arm. The rate of complete response (CR), a key secondary endpoint, was 26% in the Ninlaro cohort compared to 14% in the placebo group. After a follow-up for overall survival, the Ninlaro arm was 57.8 months and the placebo arm was 58.6 months; the median OS was not reached in either arm.

“We hope the findings from the TOURMALINE-MM2 trial will encourage constructive conversations and help progress future research efforts, particularly for patients who could benefit from an all-oral, proteasome inhibitor-based combination that helps preserve quality of life,” said Christopher Arendt, Head, Oncology Therapeutic Area Unit, Takeda. “As a company, we remain committed to the multiple myeloma community and look forward to sharing mature data from our ongoing Phase III multiple myeloma maintenance studies in the future.”

Ninlaro is an oral proteasome inhibitor. It is being evaluated across a broad range of MM treatment settings. It was first approved by the U.S. Food and Drug Administration (FDA) in November 2015 and is indicated in combination with lenalidomide and dexamethasone for patients with MM who have received at least one previous therapy. It is currently approved in more than 65 countries.

Yesterday, Takeda indicated it had entered an agreement to sell some noncore prescription drugs that are sold primarily in Europe and Canada to Germany’s Cheplapharm for $562 million. Last month the company sold off a big chunk of its consumer health products to Blackstone Group for $2.3 billion. The company has a goal of divesting $10 billion.

Takeda’s five key focus areas are gastroenterology, rare diseases, oncology, plasma-derived therapies and neuroscience. It has $59 billion in debt from acquiring Shire and is selling off noncore areas to help pay down that debt.