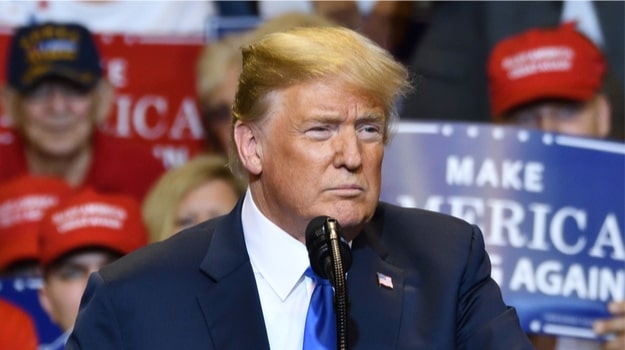 President Donald Trump, along with First Lady Melania Trump and White House adviser Hope Hicks, has tested positive for COVID-19. All three have isolated themselves while they recover from the virus that has infected more than 34 million people across the globe.

Trump confirmed the positive diagnosis on Twitter at about 1 a.m. Friday morning.

“Tonight, @FLOTUS and I tested positive for COVID-19. We will begin our quarantine and recovery process immediately. We will get through this TOGETHER,” he tweeted.

At this time, neither Trump nor his wife is exhibiting any symptoms from the infection. They will be watched closely for any signs of the well-known symptoms from the virus, such as fever, coughing, pain across the chest and others. As president of the United States, Trump will certainly be given the best medical treatment in the world should he need it. Earlier this summer, Trump claimed to have been taking the controversial malaria drug hydroxychloroquine as prophylaxis against COVID.

At 74 years old, Trump is in a category of older Americans who are at more vulnerable to infection, and at higher risk of developing more serious symptoms. Since news broke of the president’s infections, multiple news outlets have pointed to the disproportionate way senior citizens have been affected by COVID-19. According to the U.S. Centers for Disease Control and Prevention, more than 80% of the 1,023,708 deaths from COVID in the United States have been in people over the age of 65. People over the age of 65 are at risk for severe illness from the virus, which means someone in that age demographic with COVID-19 may require hospitalization, intensive care or a ventilator to help them breathe. They are also at higher risk of death, typically due to underlying medical conditions that many older Americans have.

There is no public knowledge of the president having any underlying conditions, however, Time noted that Trump’s body mass index puts him in the obese category – although barely. Being overweight is one of the factors that increases risk with COVID-19, according to the CDC. CNN also noted that Trump is known to have a common form of heart disease. However, at this time, there is no way of knowing how the disease will impact the president. The president’s doctor, Sean Conley, said that both Trump and the First Lady are “well at this time,” according to Time. Conley did not specify whether or not the Trumps were showing any symptoms of the disease.

“The White House medical team and I will maintain a vigilant watch, and I appreciate the support provided by some of our country’s greatest medical professionals and institutions,” Conley said, according to CNN.

In April, U.K. Prime Minister Boris Johnson was placed in intensive care due to COVID-19 infection. Johnson is nearly 20 years younger than Trump. Johnson spent a week in the hospital and received oxygen treatment. Johnson, according to reports, said his illness “could have gone either way,” after he was discharged from the hospital.

The president’s announcement comes 32 days before the Nov. 3 election. Beyond the White House officials, it is unknown how far into the halls of U.S. government the infection has, or will, spread. The president has infamously refused to wear a mask on most occasions, which has been recommended by health professionals as a way to stem the spread of the virus. Trump has conducted a number of campaign events and made announcements from the White House surrounded by elected officials, many of whom have not worn a mask.